Usually Find/Replace gets the job done for what I need, although sometimes using “Replace All” can break more stuff that it fixes.

But today I had this function I wanted to get rid of and simple change it with a public variable.

I want to replace it with something more simple

And this as a Replace with string 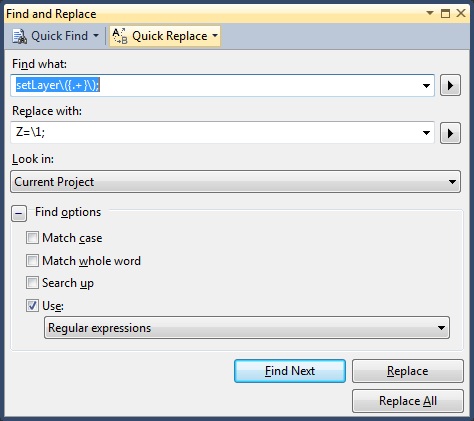 Now, notice the first one, it’s actually simple, you have “setLayer”, followed by “\(” to tell the expression we really need to be that character, after than we have “.+”, which means match any single character except a line break and at least one occurrence. Followed by “\);”

Now if you notice we have curly brackets around the inside of what the function receives as parameter, that’s because we are tagging that string to use it later.