So being a big fan of Quake, Quake 3 Arena and Doom I was eager to get my hands on id Software latest game, Rage.

Like most developers out there I’ve been impressed by John Carmack’s work and breakthroughs in gaming and computer graphics for years. When I first heard Rage was targeting 60FPS I got intrigued.
Almost every game targets 30FPS and targeting twice as that leaves less time to render each frame, even more since they were promising vast wastelands, detailed characters, top notch animations and AI.

But enough of that. I got the PC version since I’m old fashioned and I think shooters are best played with Mouse/Kb. Besides that shooters are always a tad slower on consoles to compensate the lack of Mouse for aiming. 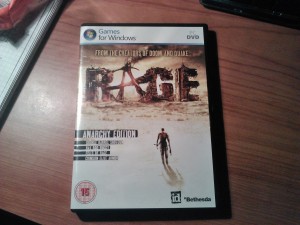 The game comes packed on 3 DVD summing a 23GB install.

The story takes place after a meteor crashing into the earth, several arks where placed underground with people in order for mankind to survive. You are one of those survivors.
There isn’t much more into, after you wake up you discovered most of the planet is a wasteland ruled by bandits, mutants and others.

From there you jump from mission to mission against the several factions.

Apart from some technical issues I first encountered, after updating the drivers I managed to play it smoothly on my laptop, my desktop rig is quite old now (6+ years) so it doesn’t quite handle it at 1080p.

I’m very impressed with the game’s smooth animations and enemy AI. The story itself is crap but the whole fun in this game is just playing it, the battles always feel fresh, holding the shotgun feels like an id gun indeed. You keep encountering new enemies with new tricks, near the end you are still trying to get the hang of that new enemy tactics.

If you have the chance try it.