So this was a different week for me. It’s been a long time that I had the chance to work on a small prototype or a 48H competition because of my work on Dary’s Legend so I decided to stop for a couple of days and do something else.

Also my cat’s been quite sick, and between the Vet and taking care of him, working on a fun project gave me more time do everything.

Since I love shump games I decided to do one. The idea is simple, you are in a arena with your ship and you just blast enemies away.

Initially I worked around 6-8hours on this back in August but had to drop it because of some much other work I had, so it wasn’t until this monday I grabbed it again.

I decided to make the game for iOS because it’s easier to make prototypes there and I can carry them around everywhere, playing them, to see if they are any good.

Actually the first 8 hours where quite productive and this is what I had after that time:

So during these past 5 days I polished it a little, grabbed myself a notepad and hand-drawn everything. It’s not much artistic, but I’m not a designer.
Had a few problems with iOS 6 due to some deprecated stuff but in the end it all fall into place.
Also some tweaks performance-wise on the Engine where made since with a lot of stuff on screen things can get out of control pretty easily specially on these portable devices.

iPhone 5 just came out and I even took the time to add support for those extra pixels, actually I just increased the viewport, no scaling.

I probably named it poorly but it’s Puwang. 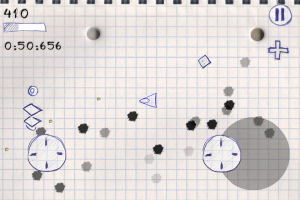 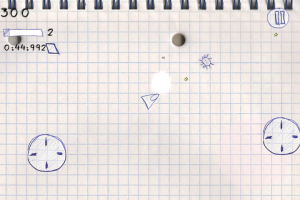 Also added some Leaderboards via Gamecenter and as I write this I’m starting to receive some feedback of the early beta builds I sent to a couple of testers. If people like it I might release it on the App Store.