Ok so I got addicted to Stargate Atlantis as well. After watching all 10 seasons from SG-1 I decided to give it a try to Atlantis. I was not convinced that it would be a good show, but the it’s awesome. Atlantis starts around season 8 of SG-1 when Daniel Jackson figures the location of the lost city of Atlantis.

Atlantis follows the adventures of a team that goes to Atlantis and being on another galaxy they only have power for one trip so it’s a one way trip only.
The characters are great, and the show is very funny, mostly because of Rodney McKay. The new main enemy are the Wraith and the show is years ahead of SG-1 in special effects. I’m already on season 4 so I’m almost finishing.
I recomend both show to everyone who gets a chance of viewing them. Since both have been canceled there’s a good chance your find packs containg the whole series. I found SG-1 complete on amazon last weekend. 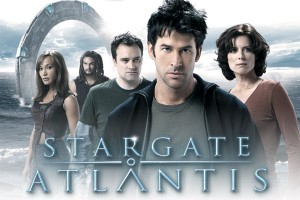