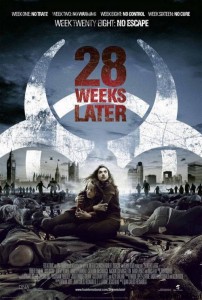 I didn’t know anything about the movie so I got rather disappointed with the first 5-10 minutes. When the zombies showed up I thought to myself “not another zombie movie, are this guys out of ideas?” I sticked to see where it the plot was heading, and got a really nice surprise. After the initial outbreak in great Britain, the infected start to starve and they die eventually, so the movie starts 28 weeks later, when the general population starts returning to a safe zone called District One. The infection is still out there and the army is burning bodies around the safe zone. After a survivor is found, they discover that she is immune, however she can still contaminate others. The plot is simple but delivers, the acting is good and some familiar faces are there, such as Robert Carlyle, Harold Perrineau (Michael from Lost) and Jeremy Renner (The Hurt Locker).