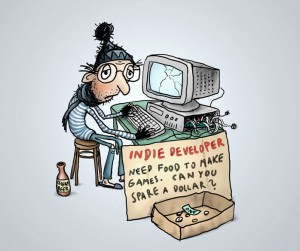 1 – You either are, or you aren’t.
People can go and , “I’m an aspiring indie game developer”. You are either doing games or not, period. If you are starting in development with your own money then you are one. People tend to think they are indie developers when money starts rolling in, well think again, cause money may never come.

2 – It’s a jungle out there
There’s not a safe path on becoming a successful indie developer. It’s not like following another’s path will get you there. That’s why giving advices is just that, it might work or not.

3 – There’s a minefield being left behind
We see it everywhere, indie bundles, pay what you want, fremium games, games at $1, the ones who made money with those models are leaving behind a bad legacy and an audience that doesn’t want to pay much.

4 – Finish you stuff
You should actually be working instead of reading this.

6 – You need to break the rules
… to know why they matter.

7 – Playing games does NOT make you a developer
Yet many think it’s all it takes, I’m good at playing thus I must be good at making them. You should however play critically, that is the key.

8 – Working alone
..can be like rowing a boat with just one paddle.

9 – Working with a team
…can be like two people on a bike, one steering and another one pedaling.

10 – Overnight success
Out of nothing this indie developer! Overnight success! Million-dollar!
And you think, “I can do that”. Yeah, except, those who are “overnight successes,” rarely appear out of nowhere. Minecraft? That dude’s been working in games for years. Super Meat Boy? I bet Edmund made over 30 games till now. They just stayed in obscurity for years. Work matters.

11 – Learn to fall
This one’s hard especially if you think your game is great and the first comment is “This is sh**”. Learn from mistakes and do it again, but better.

12 – Making games is hard work
…and you will shoot fire from your eyes to whoever says otherwise.

13 – People who tell you to keep trying
…are mostly lying, they think you’re lazy and can’t get a real job.

14 – Your parents will keep the hope
…that you get your act together and apply for IBM or Microsoft, cause that’s where the money is.

15 – You will think twice
…when someone asks you what you do for a living. It would be the first thing said if you were a Doctor.

One thought on “Some thoughts about indie dev”