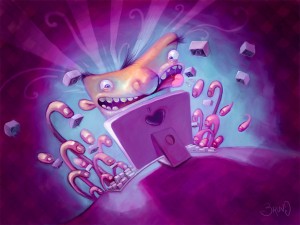 Hum…some stuff happened lately, some I can’t go into detail right now others I can.

I was talking with Rita the other days and she had this nice idea for an iPhone game.
It’s one of those small concepts that may or not work but I liked the general idea, at least enough to start a small prototype. If everything turns out the way I plan (never is) it should be a 2-3 weeks project.

So I’ve been splitting my time with several stuff at the same time. I’m 2 days in of that new prototype and I’ve also been working on our next “bigger” top secret project which everyone will love or hate or both =P

I have some tools built and a rudimentary prototype working with my magnificent coder’s art. It’s honestly the biggest thing I’ve worked alone, but the good part is that I’m happy with the progress made so far. Some of base mechanics are in place. It’s going to be a heavily scripted game, well, at least much more that the 900 lines of script that Vizati had, I’m a little confident on that since my script engine progress from a few weeks back.

After 5 months working with C# last year I’ve been re-learning how great native code is, C++ is my favorite language. Don’t get me wrong, I don’t hate any of them (well, maybe java) but C++ has that beauty and elegance that you won’t see everywhere.

On some game industry related news, Impulse was purchased by GameStop, a move that I wasn’t expecting and I’m waiting to see where it leads. I’ve been waiting for official news from GameStop since I have a signed deal with Impulse and I want to see how much this will influence us developers. Hopefully GameStop can drive a lot more customers there helping everyone.
I’ve been seeing some developers removing their games from there because apparently Gamestop is evil and all that sh**. I don’t have any experience with them so until I have some complaint I won’t make any waves.

I’ve been receiving some (well maybe a lot) of emails inquiring about my little baby engine Basalt.

Where’s some of the questions I’ve been getting.

Q: Why did you do it, there’s stuff like Unity, Unreal, XNA, Cocos2d, etc.
A: I started to do it on a need-basis and it slowly evolved into what it is today. I started working on it on December 2009. It’s not a day to night work. This also allowed me to have much more control on porting.

Q: Will you release the source code?
A: At the moment there’s no plans to release it either in open source, paid or binary mode. Why? Because I don’t think it’s ready for any of them. There’s tons of hacked lines, tons of //todo, stuff I haven’t tested, others I know that don’t work but haven’t got the time, etc etc.
While I’ve considered to sell/release it I don’t think it’s ready and honestly at this point there are far better solutions out there.

Q: Can I get access to the source to help you improving the engine?
A: Sorry, no, see previous answer.

Q: Is it genre oriented like Source is oriented for FPS?
A: Not a chance, at this point I can pretty much do anything I want, at least in 2D. The genre-oriented is usually part of the game code.

Q: How did you make that editor on those youtube videos? #1 #2
A: It’s called Sapphire and I used C#/ XNA 3.1 with Neoforce Controls (discontinued). I’m going to port it to C++ eventually. Probably cross-platform.

Q: You still haven’t answered my question
A: Are you sure?

Btw, tomorrow is my turn to make an article for http://idevblogaday.com/, let me know if you have any iOS related stuff you want me to talk about it and I’ll consider it.