I’m trying to decide where my next game should store their save files so I decided to make a poll.

Personally I think that

is a total idiotic thing.

Starting on Windows Vista there’s a pre-created “Saved Games” folder but most people seem to miss it since it’s not on the “My Documents” folder. 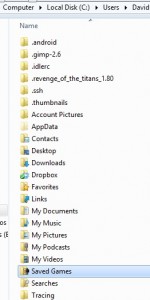 Others just create a folder directly on “My Documents” which some users find a bit obstructive.

I’ve been considering giving a read at Dropbox API (if any) too, It would be a nice touch to allow direct integration. But that’s just an idea that’s probably tricky to integrate.

So tell me what you think or suggest another one.

2 thoughts on “Where do you like games to store their save data?”